to begin with the end

so last week i got my pinhole camera pictures done! super happy with my prints and so was the professor. she also made us make up the 'rules of engagement' for grades and class critiques. one of the punishments we came up with "miss a critique, you do one on your own the next class and must bring in a snack to share".. our professor liked that. one of my friends from last semster's class looked at me and said "don't be offended, but i hope you miss one... your food is awesome". no offense taken!! but really, all she had of my 'food' is rice krispie treats and cake.

but here is my problem. i need to order my supplies and i still don't have my refund. i checked the website that would tell me what i owe or get back.... it says what my refund will be, which means the grants came through and it's only a matter of days that i get my refund (i hope). my supply list isn't very long, but the professor said "those are minimums for the amount of film". DANG! well, my friend just might get her wish and i'll miss a critique. thank heavens we won't have them every week like in the intro class.

my art-lecture class was fine. i thought we were going to have a 'slide quiz' on monday so i really studied for it. turns out the test was wednesday. for the quiz, the professor shows us ten slides... we have to give two facts about the piece she is showing us. if all we knew was the title and the artist, BAM! there's our two facts. if we didn't know them... any fact that we discussed about the piece would do. for example: in the marriage of arnoldfini... what's the significance of the one lite candle, or the dog, or why they are not wearing any shoes. stuff like that. i knew the title of all and the artist name for all but 1. but for good measure, on the off change i got one of them wrong, i threw in a third fact for each.

we also had another paper to write. this time it was on our favorite color. we had to tell how it was made, why it was significant, why an artist chose that specific color for a piece of work... lots of stuff. i chose blue, i found a ton of info on it. did you know, at one point, to get the color... you would have to saok the leaves of the woad plant in human urine for three days? ICK! and not just any urine, but that from men who have been drinking alcohol! ya know, i think i'll send crayola a thank you card for making it possible to get our colors without the work. i'll keep ya posted on my grade, cause as of today, still lacking the grades for those things.

soooooo, hot professors class is slowly becoming my least favorite. had i known all the drawing that was gonna be done.... i would have totally skipped out. well, too late now to drop it. so here is what i turned in for our project two: 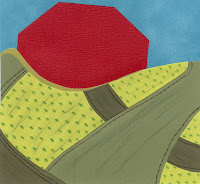 up close of my sneaker, cut paper (pain in the a--), watercolor pencils.

my professor liked this one better "texture is there, we know what it is, and we always see a stop sign with running shoes..." i don't! i used the treadmill.... not stop sign present. ANYWHO 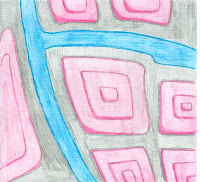 he would have liked this one more if the colors were more vivid (just used the watercolor pencils).... or in other words... done with cut paper like the other. if i had a bit more time (aka, not procrastinated) and had more patience (i really wanted to curse out loud for the difficulties i was having with the other)... i would have. i might still later.

so this next project has us taking pictures of animals and simplifying them. think of sports teams logos, or the WWF logo with the panda... stuff like that. again.... I CAN'T DRAW, at least very well. so i went with three that i think i can do. i chose a peacock, two elephants together, and a white tiger. since the finals have to be in black and white, how hard could the tiger be, right? well, the prof seems to think it will be difficult. i got the peacock done in class and just now finished the elephants. i had to trace them because i was just having a hard time getting the lines right. and since i don't have a working black ink felt pen or sharpie... i used charcoal. not exactly the same effect, but i gotta make do with what i have until that refund comes through. i'll probably have to trace the tiger....  scratch that. i KNOW i will have to trace the tiger. i'll post them when i get all three done.

My Friends and Family

Ms. JMU
In a rather small nutshell... I'm a full time mom, caregiver, and student (in that order). I have discovered a love of film photography, but still cling to the joys of digital. I want to be able to share a little bit of what I love to anyone and everyone that comes to view my little blog.